The Role Of Art Therapy In Neuroplastic Improvements 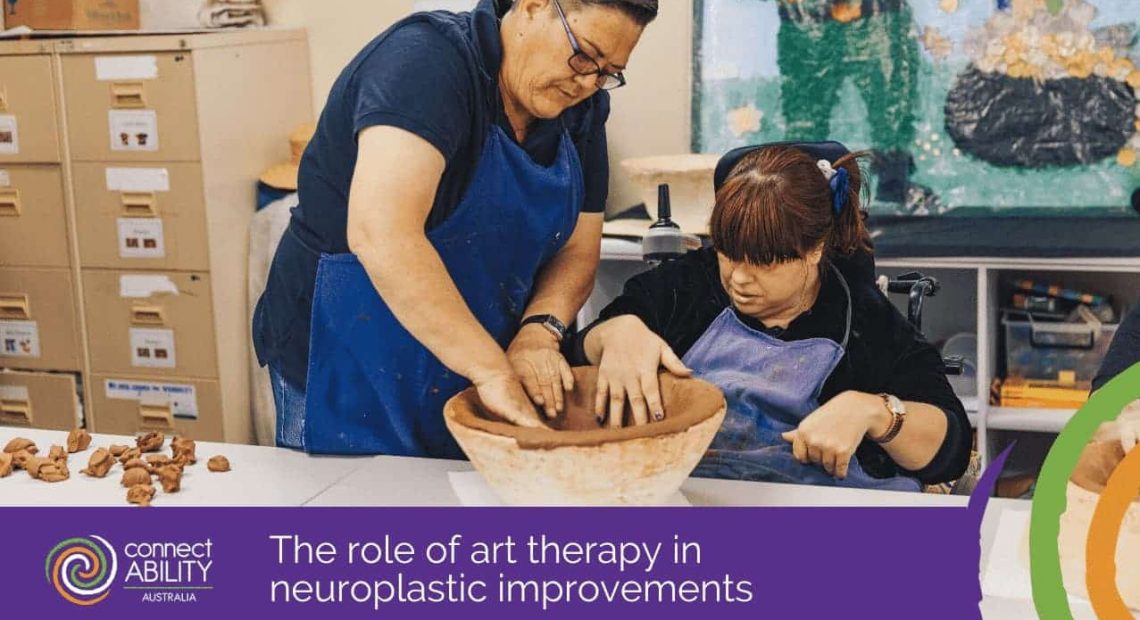 How neuroplasticity contributes to learning, memory and recovery from injury and the role of art therapy in encouraging the process

The Arts Program at ConnectAbility is a huge source of pride to our organisation, contributing to better outcomes for our clients in many facets of their lives. Many of these improvements are driven by the brain in a process often referred to as neuroplasticity, and this is how the brain plays a role in facilitating injury rehabilitation, learning new skills, improving or retaining important memories.

The Oxford Dictionary defines neuroplasticity as: ‘the ability of the brain to form and reorganize synaptic connections, especially in response to learning or experience or following injury.’

It is also known as neural plasticity, brain plasticity and more simply, the plastic brain. The terms all refer to the ability of the brain to change and reorganise itself throughout the life of each individual, in response to any number of stimuli which include but are not limited to: behaviour, thought environmental stimuli, emotions, injury, traumatic life events, and learning new skills.

Why is the plastic brain and neuroplasticity important?

The neuroplastic brain is one that can change itself, and that means that it can learn new things. It is important because neuroplasticity is the main contributor in our childhood to learning new skills, over-writing them when we learn a better way of doing that thing and adapting our approaches when the old way no longer works for any reason. It is helpful to think about the plastic brain as one that is malleable, and still open to suggestions.

Until relatively recently it was believed that the brain only remained plastic until adulthood, where significant changes to its function essentially became impossible. It was thought that if an area in the brain that performed a certain function became damaged, it was not possible to regain that function.

The research and ideas that contradicted this theory goes back for over a century, but has only been given significant attention and resources in recent history. The first breakthrough research trials done on the subject were conducted in 1969 by Dr. Paul Bach-y-Rita.

The area of neuroscience devoted to exploring and researching neuroplasticity is therefore still in its early stages, though they are backed by solid prior evidence; the results so far are astounding and bring hope to millions of people around the world.

Who benefits from neuroplasticity and improved brain function?

Everyone benefits from neuroplasticity and improved brain function. All of us have been, and continue to be the beneficiaries of this special ability. When we learned to read, to use a spoon, to remember our family, and to associate facial expressions with emotions – all of this was facilitated and cemented by neuroplasticity.

Though we all gain benefits from this function, it comes as no surprise that those who need it most and experience the greatest impact from it are people who are living with injuries, disabilities and the degenerative effects of ageing on the brain.

How does neuroplasticity work?

Neuroplasticity can involve many processes, which include changes to neurons (brain cells) and changes to the neural synapses and pathways in the brain. Contrary to popular belief, the brain map and it’s connections are constantly in flux. Much like a gardener, neuroplasticity is what allows the brain to make changes to itself – it decides what pathways and connections need strengthening, and which ones it doesn’t need anymore. The deletion of pathways and connections is called synaptic pruning, the birth of new neurons called neurogenesis and the planned death of underused neurons is called apoptosis.

The plastic brain can oftentimes regain a lost function after trauma or injury, by rerouting the signals to a new, undamaged part of the brain. This new part of the brain will then learn the new function and grow in size to accommodate it – only made possible because of its plasticity.

By understanding the processes that are happening, activities and progress can be better designed, understood and monitored to support desired outcomes.

It is also extremely uplifting to know and understand that things are not hopeless – so many situations that used to be viewed as final and unchangeable now no longer are – and that is worth celebrating. While neuroplastic change may not be a cure-all, it certainly can contribute to improved outcomes.

Those that can most benefit from knowing and understanding neuroplasticity and how to take advantage of it are those with:

Many existing programs that cater to these communities work solely because neuroplasticity is driving the change, but were previously unaware that this was why they were successful. Now that we know, programs can be even more tailored to the individual and results more accurately monitored.

The arts program running at ConnectAbility is led by Susan Porteous, our talented Arts Facilitator. Susan has a degree in Fine Arts and a bachelor in Community Services, and utilises both to deliver an arts program that results in unique individual outcomes.

Each individual has their needs and interests assessed, and a special program designed to bring about the best outcomes possible for them.

Art therapy is classified as activity-dependent plasticity, which is where neural plastic change occurs from a combination of physical and cognitive function, and personal experience. It is an intrinsic process, meaning that it is not change that occurs in response to outside factors – it is entirely up to the client.

The feeling and activity generated through producing art inspires a profound inner change in our clients that is entirely their own work and choice, making it a very special and valuable experience for them. It also makes neuroplastic change far more likely, as it is driven by the clients own motivation and engagement.

As the best kind of therapy and approach to rehabilitation and wellbeing is holistic, the option for our clients family members and friends to join in art therapy with them adds another element to the experience, and encourages deeper neuroplastic change by expanding the context of their learning and experience.

The stronger the impression an activity makes on the brain, the more likely it will be to cement neuroplastic change. The inclusion of family, friends or support networks introduces an external factor, to lend support and confirmation to the growing internal changes.