10 Famous Individuals Who Overcame Disability to Follow their Dreams 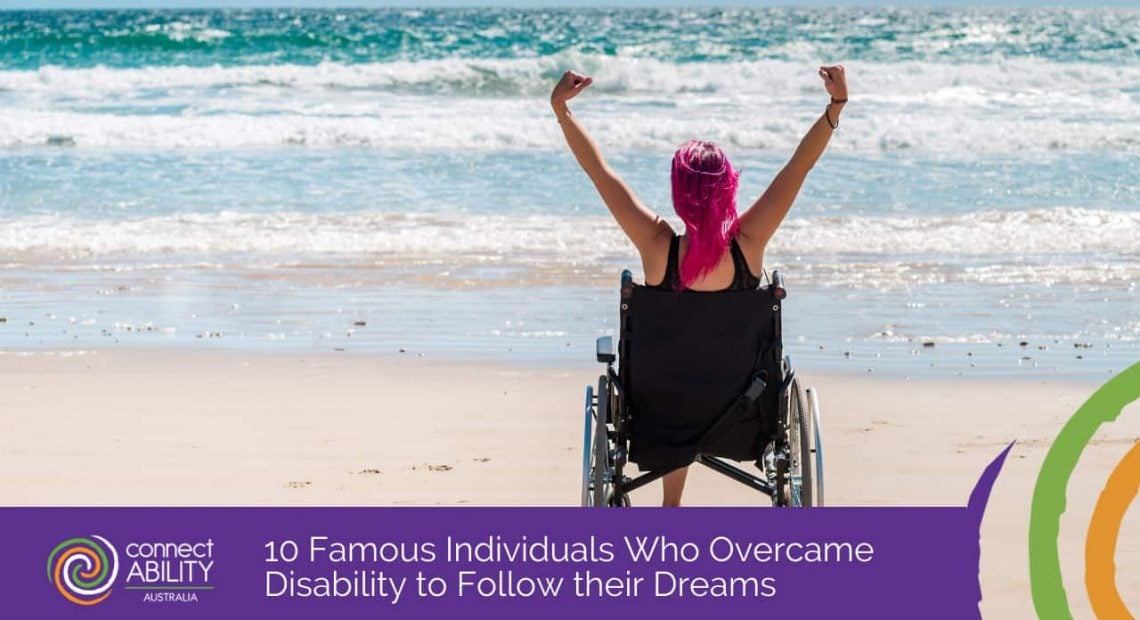 A person’s identity runs more than just skin-deep. In the same way that we do not let our appearance define who we are, we cannot let our identities be defined by only one aspect of our lives. Disability does not define identity. Many people with disabilities face this identity challenge every single day. Striving to perform every day tasks, some individuals come across more obstacles than others. It is important for every person to not let obstacles define them and to tackle challenges head on. We respect individuals who face overwhelming obstacles and persevere to follow their passions.

Everyone has a dream or a passion. Not all of these are easily achieved to begin with, so taking the first step is usually the hardest part of reaching that goal. Just imagine having a dream that you want to achieve and knowing that you will have to work harder than other people would, just to reach that aspiration. Seems unfair doesn’t it? Nevertheless, many people endure, and they are well-deserving of praise.

People with disabilities face many struggles every day and they deserve admiration for persevering through their challenges. Here are some famous people with a disability who went after their dreams and passions.

The “Superstition” and “Signed, Sealed, Delivered” star is widely regarded as one of the greatest living artists today. His piano skills, along with his distinctive voice, have graced many ears. This man is now a living legend and known across many generations.

Stevie Wonder was born premature which resulted in a condition known as retinopathy of prematurity leading to his retinas becoming detached. His blindness did not get in the way of him becoming one of the greatest music icons of all time.

Stephen Hawking was a physicist who greatly contributed to his field. Aside from all the complicated research he did and contributed to, he also greatly benefited the field of science communication. He made science accessible even to the ordinary person, and will be remembered as a man who helped illuminate many minds.

Stephen Hawking was diagnosed with ALS (Amyotrophic Lateral Sclerosis), which made voluntary movement an extremely challenging task for him, but his condition did not deter him from becoming one of the greatest minds that the world has seen in modern times.

No matter what religion you follow, we cannot deny that the Christian evangelist Nick Vujicic is an extremely inspirational person. In fact, his condition helped shape his worldview, and this has helped many people around the world cope with their own personal struggles.

Nick Vujicic was born in Melbourne with a condition known as tetra-amelia which led to phocomelia. This means he was born without limbs. What is admirable about him is that he used his disability to inspire people to lead more fulfilling lives.

Frida Kahlo de Rivera, more widely known as Frida Kahlo, was a Mexican painter who used her native country as inspiration for her many works of art. People widely regard her work as a great contribution to Mexican culture and identity.

Frida Kahlo contracted polio as a child and a later accident further caused her physical problems. Nonetheless, her skill and vision was admirable, and her works of art will forever be a part of Mexican culture and history.

Helen Keller was an American author and is quite well-known for being depicted on-stage and in many on-screen adaptations. Her books, which included her autobiography, have gained international acclaim. She remains a prominent literary figure more than fifty years after her passing.

Helen Keller acquired a disease as an infant, which led to her losing her senses of sight and hearing. The loss of these two particular senses led her to have great difficulty with language. Her hard work, and the help of her teacher Anne Sullivan, led to her being a successful author.

Italian musician Andrea Bocelli’s music is internationally known. His voice is so distinct that listening to any line from any of his songs will give away the fact that he’s the one behind the microphone. Aside from being a successful singer, Andrea Bocelli is also famous for writing his music.

He was born with glaucoma and suffered an injury during his teenage years which completely robbed him of his sight. His passion and hard work were more than enough to help him overcome his disability and become a world-wide success.

Alex Zanardi was an F1 racer who later became an athlete after having his legs amputated due to an accident. His drive to succeed in a different field, after his accident, is certainly deserving of praise.

Kitty Cone is widely known as a disability activist and has greatly contributed to increasing awareness about the plight of people with disabilities, and helping legislators see what changes need to be done. What is notable is that Kitty Cone’s voice has reached far past her native country and has been heard across continents. This has led to a greater awareness of disabilities.

John Nash was perhaps most famous for his story being shown in the movie “A Beautiful Mind”, where he was played by Russell Crowe. John Nash was a mathematician and a Nobel laureate who struggled with schizophrenia, which made his work in the academic world extremely challenging. Nonetheless, he learned to live with his condition and continued being the brilliant learned man that he was.

Henry Lawson was of the most famous Aussie poets. His short stories and poems are a staple in schools around the world, and his works will likely remain classics for a long time to come. Henry Lawson lost his hearing to an ear infection during his teenage years but soldiered on to become one of Australia’s most famous writers.

ConnectAbility believes in every person’s ability.

Many people with disabilities have also struggled before. Getting help does not make any person less strong. If you or your loved one need support, know that ConnectAbility is here for you. To learn more please go to https://www.connectability.org.au/.