Creating Meaning And Well-Being Through Art 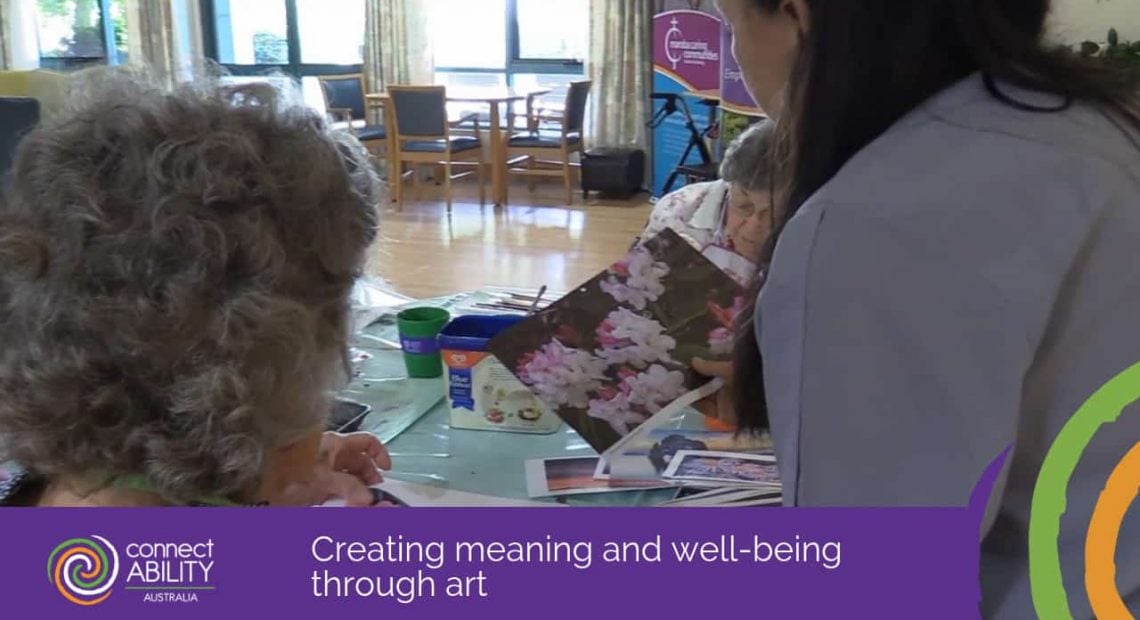 With an extensive background in leading well-known organisations, the CEO of Maroba, has devoted herself to caring for people in need her entire career. We asked Viv Allanson to say a few words in regards to the Bright Stars Arts program that ConnectAbility have implemented into Maroba.

It’s been such a great program, we wanted to create meaning and meaningful experiences for our residents.

It’s wonderful be here to talk about ConnectAbility and the relationship they have with Maroba. It’s been such a great program and it came about because we wanted to create meaning and meaningful experiences for our residents. I think for too long aged care and health care settings has been all about clinical outcomes, clinical goals, and clinical KPI’s that are quite removed from people’s actual experience and from people’s meaning in life. So, we decided a few years ago that we wanted to look for opportunities to create meaning and so we built a relationship with ConnectAbility, and they were offering qualified people to come and do art programs with us. We jumped on board and we’ve been so happy with it the programs being duplicated throughout Maroba, so now happens in two areas across the facility. And it’s just going from strength to strength. We initially started it as a trial, but it’s no longer a trial it’s part of the overall program here.

It’s about not railroading people into a program because you think it will be good for them, it’s about identifying their strengths, and that’s how ConnectAbility comes in. They ask what are the strengths of the residents? and will they suit that type of program?

They’ve been able to bring that together for us and capture the imagination of residents and families. We are seeing people that in years gone by when they were much younger that loved art, they are getting another chance, they are coming to life in those classes.

You can see behind me some beautiful art works, we are so thrilled with the art works we want to show them off in our Maroba manor and buildings. We’ve had cards made, and families can buy the cards and use them for Christmas cards. We’ve had bookmarks made- we just love the work.

It’s a great expression of the creativity within somebody who has dementia, again it’s like those clinical outcomes that keep getting measured, people label people with dementia. It’s like people with a disability get given a label, and we don’t see past that label and look into the soul of that person, and what still resides there, because what resided there 30, 40 years ago actually still reside there, and this art program draws that out.

We see it in their art work, the movement of their hands, the expression of colour, the expression of design on the page, it really is quite remarkable. What we see manifests from their souls. There’s a sense joy in the room, we do the art over a cup of tea, we do it as a group so that the lady’s get to talk. And the icing on the cake would be is that the families come in. And they will sit there, with their Mum or Dad, and they will enjoy the program as well.

Some will sit and look on, others will help them choose a colour, or guide their hand, it doesn’t really matter, but the thing is there’s meaning for them as well, not just meaning for the resident, but it’s a meaningful experience for all. They’re not just visiting an aged care home, and they don’t just sit there and wonder what they are going to talk about with their mum. They get to talk about the art, they get to talk about what they are feeling, and people are responding, people are going away with a sense of joy.

My own Aunty is in the program. I’ve got a couple of relatives living at Maroba, and my aunty, well I didn’t know she was an artist, I didn’t know she was so creative. But, she has really responded very well. Her sons live in Sydney, they are up here every weekend, and it gives me joy to see that she is engaged, she is not just sitting around, she’s not just waiting for the family to come. She’s expressing herself in incredible ways.

Where the dementia is inhibiting her normal expression, she not able to express herself overly well, yet she is able to express herself incredibly well in the art program. Lots of her work has been bought for cards for Christmas that she had made. It never ceases to amaze me what she is coming out with. It’s absolutely precocious. It’s really helped her in terms of agitation, she gets very tearful, and gets frustrated in not being able to express herself well, she has lots of ailments and pain, a whole lot of things that seem to just disappear when she is expressing herself in art. And I love that. It’s great. The great thing is I keep sending photos to my cousins. I can tell them Aunty Margaret did all these things, and of course it just makes their day to get those, when they are just sitting at work and getting that next picture, that next smile, that next look. The art program ensures she is engaged and she is happy, and her life is safe here at Maroba.

They’ve been able to capture the imagination of residents and families.

Another thing I love about the ConnectAbility team coming in, is the relationship that we have. I love that we can have external professional people coming in here, if there was something not quite right or they were concerned about a resident, or something they have observed they will tell me. There’s another support network for us. Because we don’t always capture everything, and we know how vulnerable older people are, particularly people with dementia. Knowing we have a professional team working with us, I trust them to know. They feel comfortable with me to say something. It’s never happened, but I feel that they would if there was something of concern, because they have my residents care as a priority. They are not just coming in here on a contract, they aren’t just sitting people down and expecting them to participate, they’ve have built a relationship with each one of the residents. They get to know them as we do.

So, it’s a beautiful program, it about relationships, it not just the expression of art it about the art of relationships. And there something special about that because guess what, not everyone has it. In nursing we become so clinical, people are so good at the science of nursing, but many are missing the art, because nursing is an Art and a Science. And ConnectAbility get it. The team absolutely get that. ConnectAbility draw from their own personal resources, I see them coming up with ideas and themes, and all the time they are thinking of us. They don’t just arrive on the day, they come in fully prepared. They know their stuff. They know what they are doing. So, when I walk into the room in the middle of an art class I don’t like to interrupt. It’s not my place, it not my time. But I can’t help being drawn in, the residents look over their shoulders at me, respond to me, and I feel like they are inviting me into their time and their place. I get to learn a lot more about the resident in that space as well. I so value it and appreciate it.