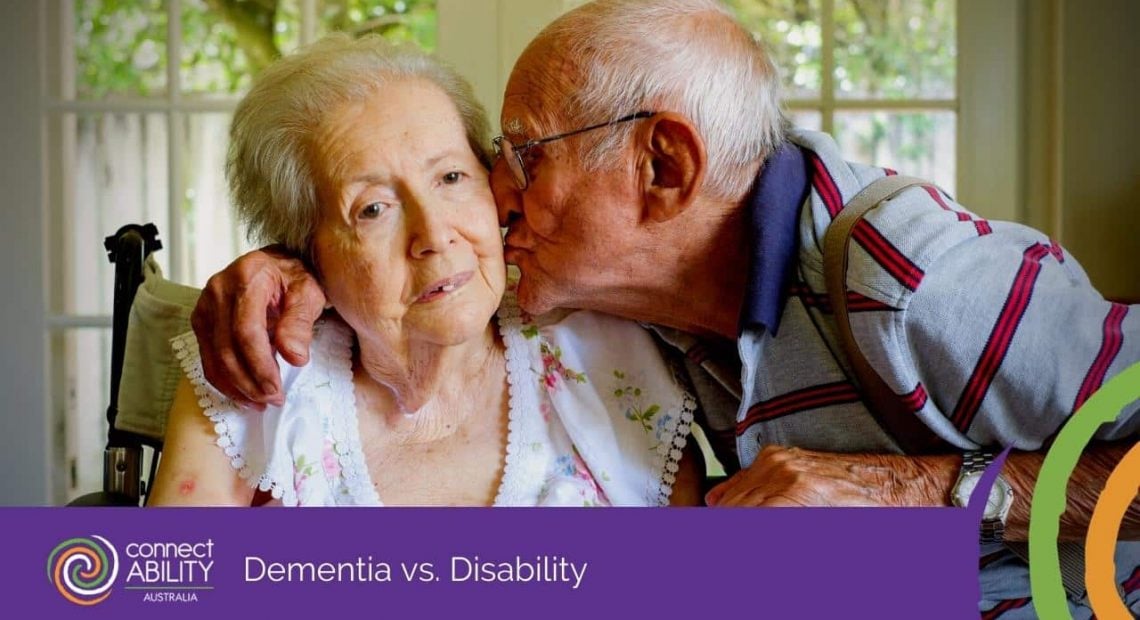 Is dementia a disability?

Dementia is a syndrome that affects an estimated 472,000 Australians and is expected to increase to almost 1.1 million by 2058. It is the second leading cause of death of Australians and the leading cause of death for women. While most people will tell you that dementia is a disability, there is a key issue in changing the system to recognise the symptoms of dementia as disabilities.

The Australian Institute of Health and Welfare defines dementia as a group of similar conditions characterised by gradual impairment of brain function. It is commonly associated with memory loss, but can affect speech, cognition (thought), behaviour and mobility. An individual’s personality may also change, and health and functional ability decline as the condition progresses.

“The World Health Organisation’s Global Dementia Action Plan adopted in May 2017 commits its members, including Australia, to take practical steps by 2025 to encourage progress in dementia awareness, risk reduction, diagnosis, care and treatment, support for care partners and research.”

Dementia as a disability

Prior to 2016, the World Health Organisation (WHO) considered dementia to call under the umbrella of mental health. In 2016, at the WHO Mental Health Gap Action Program Forum in Geneva, Dementia Alliance International’s Chair reminded WHO that dementia is not a mental health condition, intellectual disability, or psychosocial disability – rather, the symptoms caused by dementia, which result in nerve cell death and shrinkage of the brain, are cognitive disabilities.

Based on the evidence presented, and Dementia Alliance International’s (DAI) request to include an additional category under the umbrella of mental health for dementia, the WHO added a fourth sub-category for dementia: cognitive disabilities. Thanks to that intervention, dementia is now being described in UN documents as a cognitive disability and, as such, it must be remembered that people with dementia are fully recognised by the UN as rights bearers under the Convention on the Rights of Persons with Disabilities (CRPD) treaty.

Despite this win for dementia sufferers, DAI’s Chairperson noted that many people in the global dementia community are concerned that the Global Dementia Action Plan (GDAP) shows little evidence that CRPD Articles have been used to underpin the policy, or the WHO Disability Action Plan (aside from seven cross-cutting principles).

While dementia more commonly affects those aged 65 years and over, it can affect others and is not a normal part of ageing. The disabilities caused by dementia don’t just affect the individual, but also affects carers and family as it increases the individual’s reliance on them – and it’s not an easy disease to live with. As the disease progresses, dementia sufferers become more and more reliant on assistance from carers in most, if not all, areas of daily living.

Research has proven that a variety of factors contribute to the risk of dementia and may affect the progression of its symptoms. While there are risk factors that can’t be mitigated, such as age, genetics, and family history, there are also several modifiable risk factors that may be influenced to prevent or delay dementia. For example, while high levels of physical activity, social engagement, and education are factors known to protect individuals from developing dementia, diabetes, hypertension, smoking, obesity, depression, and hearing loss are all factors known to increase the risk of developing dementia. Click here to learn more about How to Reduce Your Risk of Dementia.

The Australian Bureau of Statistics found that most dementia sufferers are living with multiple long-term health conditions, with more than one in six having nine or more. Including the co-existing health conditions below, 83% studied in 2018 reported having a profound or severe core activity limitation.

What makes dementia a disability

People with disabilities require assistance with a range of activities due to their health, patients with dementia are no different – as their disease progresses the level of care they need also increases.

Dementia Australia’s CEO, Maree McCabe says, “when a patient aged less than 65 presents with changes in mood and behaviour, clinicians will ‘probably think depression before dementia’. ‘It’s not that they don’t work to get the right diagnosis,” she said. “It’s just difficult to determine what the diagnosis is, given that many of the symptoms of dementia are actually present as part of the symptomatology for other illnesses as well.”

The Royal Australian College of General Practitioners published an article in early 2021 discussing how GPs are ideally placed to address the challenges of caring for people with dementia and how a proper dementia assessment takes far longer than the standard consultation time of 15 minutes. Increasing the availability of dementia screening clinics, equipping all aged care workers with a good understanding of dementia, and getting Australia to recognise dementia as a disability is a major step towards reducing the discrimination that dementia sufferers face every day.

While people who have illnesses such as cancer can easily access opportunities such as rehabilitation, people living with dementia are unfortunately not able to access that level of support. Commonly, if you’re living with dementia, health practitioners tend to speak to the care partners about decisions to be made instead of involving the dementia sufferer in their own care plans. A basic human right is to be able to make your own decisions about your life, so having a doctor who will work with you AND your family carer is vital to ensuring everyone is on the same page.

ConnectAbility can help you to find out more about disability supports and aged care services that may be appropriate for people with dementia.

ConnectAbility Australia believes that everyone deserves to be treated as an individual, so we target a range of social activities to provide clients with experiences that are in line with their interests and needs, and help to contribute to your immediate and broader communities. We want to equip people to lead the best life possible and achieve their goals, dreams, and aspirations to live as independently as they choose.

The National Disability Insurance Scheme (NDIS) provides services and support for those under the age of 65 with early onset Alzheimer’s or dementia. Contact your local registered NDIS provider such as ConnectAbility Australia for more information on disability and aged care support services that may be of benefit to you or a person you care for.

No matter what stage you’re in, ConnectAbility are here to help you or your loved ones access the services and supports you need. Whether you’re looking for NDIS Case Coordination, Aged Care services, or Disability Support, please call us on 02 4962 1000 (Newcastle) or 02 4349 3700 (Central Coast). Alternatively, you can email us at contact@connectabilityaus.org.au or complete our contact form to have a ConnectAbility representative contact you.