NSW Australian of the Year 2019 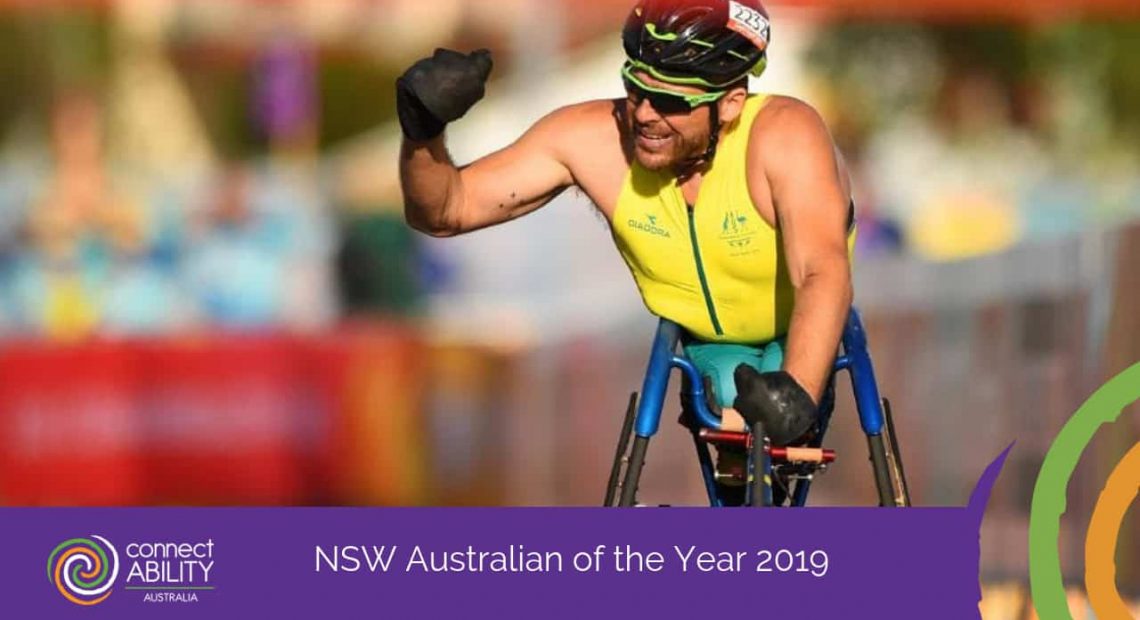 “Representing Australia over a 20-year wheelchair-racing career, Kurt Fearnley AO has captured the hearts of the nation. Winning thirteen medals across five Paralympic games, Kurt now champions the rights of people with disability and advocates for greater access into communities and workplaces. Kurt’s determination and success are an inspiration.” (Australian of the Year Awards)

Kurt Fearnley is an international recognised athlete, disability advocate, and an inspiration. Kurt was born on 23 March 1981 with sacral agenesis; a congenital disorder called sacral agenesis which prevented fetal development of certain parts of his lower spine and all of his sacrum. At the time of his birth, doctors did not believe he would live longer than a week. Human will and family love appear to trump scientific expectations time and time again. Kurt grew up in the small New South Wales town of Carcoar outside of Orange and Bathurst. Kurt’s indomitable spirit was apparent at an early age, when he would crawl through paddocks with his brothers and sisters and race his wheelchair down the grass track at school athletics carnivals. He took part in all sports including athletics and rugby league. He won his first athletics medal in high jump. At the age of fourteen, Kurt took up wheelchair racing and at seventeen took it to an elite level. After leaving Blayney High School, he moved to Sydney to train and start a Bachelor of Human Movement degree. Now, Kurt Fearnley lives in Newcastle with his wife and two children, working as a teacher.

Kurt has represented Australia internationally in wheelchair-racing for twenty years. He competed in the Paralympic Games in Sydney, Athens, Beijing, London, and Rio de Janerio, winning medals in medium to long distance races. He won gold medals in 2004 and 2008. He has also successfully competed in the World Para Athletics Championships in Assen and Christchurch winning gold medals in the 800m, 5000m, and marathon in his T54 class. This year, he ended his international career on a high – with gold and silver medals at the 2018 Commonwealth Games and carrying the Australian flag in the closing ceremony.

In addition to sporting competition, Kurt has embarked on personal endeavors and feats of physical endurance. On 30 September 2009, he conducted a training climb of Sydney’s Centrepoint Tower’s 1,504 fire stairs in 20 minutes, taking them two at a time. The Tower’s manager said this was quicker than the 25 minutes required by most able-bodied people. In November of 2009 he acknowledged the sacrifice of Australian soldiers, crawling the entire 96km length of the Kokoda Track in support of Beyond Blue, to raise awareness for men’s health. Then, in 2011 he crewed on the winning News South Wales RP63 yacht Loki in the gruelling Sydney-to-Hobart yacht race.

Kurt Fearnley champions the rights of people with disability and advocates for greater access into communities and workplaces. His determination and love of life provides inspiration to all Australians. He was ambassador for Don’t DIS my ABILITY for four years, a campaign for employment equality. In 2010 Kurt was an ambassador for the UN International Day of People with Disabiltiy (IdPwD). The Australian Government has been supporting IDPwD since 1996 and provides funds to promote and raise awareness of the day around Australia. The IDPwD is held on December 3rd every year. It aims to increase public awareness, understanding and acceptance of people with disability and celebrate their achievements and contributions. The theme for 2018 is equality and inclusivity for persons with disabilities.

Kurt is currently a board member of the Australian Paralympic Committee and previously sitting on the National Disability Insurance Scheme’s Independent Advisory Council, the board of Australian Volunteers International and the Australia Day Council of NSW.

NSW Australian of the Year

If you’re interest in Kurt’s story, why not read his autobiography Pushing the Limits: Life, Marathons & Kokoda. The 300-page book published in 2014 outlines his life growing up, his challenges, his desires, his achievements and advice.