The Benefits of Mixing Aged Care with Child Care 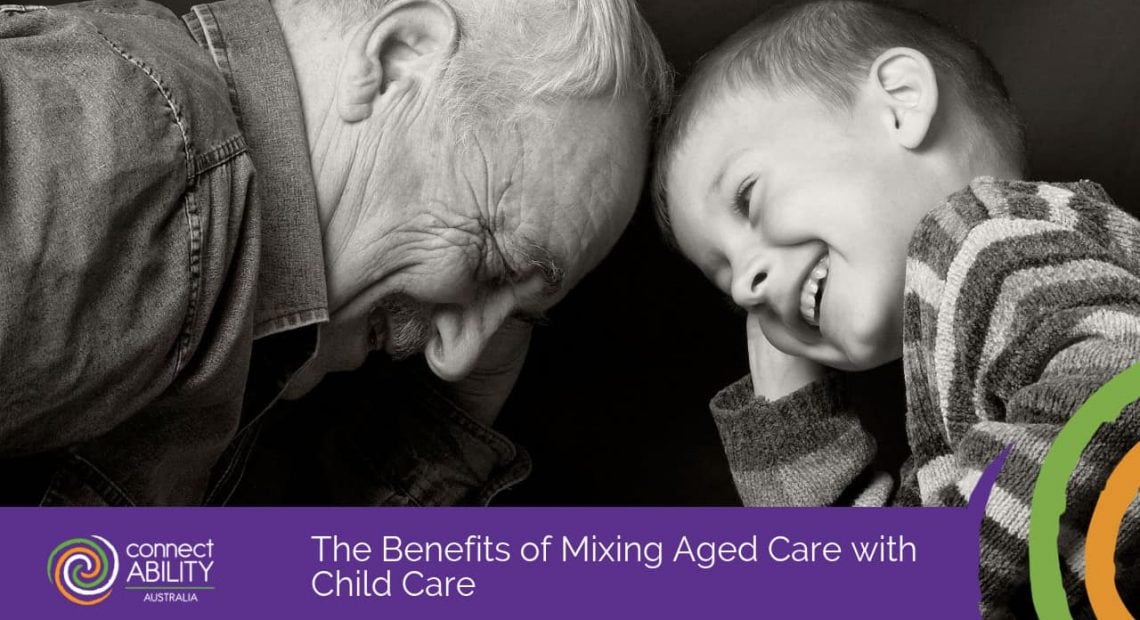 As a kid, coming home from visiting your grandparents meant that you had just been spoilt with food, attention and love. The elderly cherish spending quality time with children, and the bond between the two vulnerable groups could be more beneficial than we realise. We live in a society where care of the young and the old is increasingly segregated, with very limited opportunity for the two age groups to interact. These ‘book-end generations’ could become great resources for each other – all we need to do is put them together.

Inter-generational play groups could be an underrated solution to manage Australia’s ageing population. Combining care for children and the elderly has a range of benefits for both groups.

In the last 20 years or so this concept has been increasingly explored– particularly in the United States, where more and more shared care facilities are being opened .The Intergenerational Learning Centre (ILC) is an award-winning child care program located in West Seattle. The child care building and campus is also home to more than 400 older adults.

Five days a week, the children and residents come together in a variety of planned activities such as music, dancing, art, lunch, storytelling, or just visiting. These activities result in mutual benefits for both generations, enhancing the opportunities for children and people of all ages to have frequent interaction.

The program offers children opportunities to:

In addition, residents and program participants benefit from:

In Australia, three researchers at Griffith University led a nationwide study in 2015, looking into the benefits of mixing aged care and child care in an inter-generational setting.

With an ageing population placing pressure on the nation’s aged-care services and rising dementia numbers, it’s hoped the model will delay a decline in cognitive function and assist the elderly in maintaining their independence for longer.

Griffith professor Anneke Fitzgerald, a former registered nurse, thought of the idea for the study during a phone call with her daughter, who was talking about the ‘trials and tribulations’ of working in child care. Fitzgerald realised that many of the challenges in the two sectors were the same. Fellow Griffith Business School professors Katrina Radford and Nerina Vecchio were quick to jump on board and the three set out to interview as many child care directors, aged-care centre managers, and consumer groups as possible to better understand a clearly under-researched and under­funded area.

Preliminary results suggested that there was a gap that needed to be filled and that the development of a new approach would see the elderly gain valuable opportunities to socialise and renew their sense of self-worth, rather than isolate a section of the population.

One option would mix aged care and child care by placing centres side by side, with common kitchen and leisure facilities, such as the Intergenerational Learning Centre in Seattle.

Another would take on a form similar to that of the ‘Grandfriends’ program being trialled at the Southport Early Childhood Centre on Queensland’s Gold Coast, where elderly people pay regular visits to paint and read with the kids, and exercises as simple as bubble-blowing have been proven to increase lung capacity.

Although it is an under-explored topic area, this isn’t the only study conducted in Australia on the benefits of intergenerational learning.

St Michael’s Collegiate Early Learning Centre located at Bishop Davies Court, Tasmania was opened in April 2006. Bishop Davies Court is an Aged Care Facility operated by OneCare. The Tasmanian Education Department proposed the idea of bringing the children and the elderly together in play activities to establish an intergenerational project.

Together these two organisations combined to offer an intergenerational program (KITE – Kids Interacting with The Elderly) that has the elderly and the young children sharing activities together and developing relationships. With help from the Vincent Fairfax Family Foundation, a Resource Guide has been developed to assist others to implement a KITE program.

In addition to benefits to wellbeing and health, intergenerational care models are also likely to be cost effective, as they allow for synergies of resources such as labour, buildings, learning materials, and activities.

The idea of intergenerational care and learning is founded on the notion that old and young can bring new energy, knowledge, and enthusiasm to each other’s lives.  Social policy will need to be changed in Australia if this is to move forward and be a sustainable care model. If it is to be considered for every state in Australia, more research will need to be conducted to show the benefits of inter-generational care.