Is Dementia a Mental Illness? 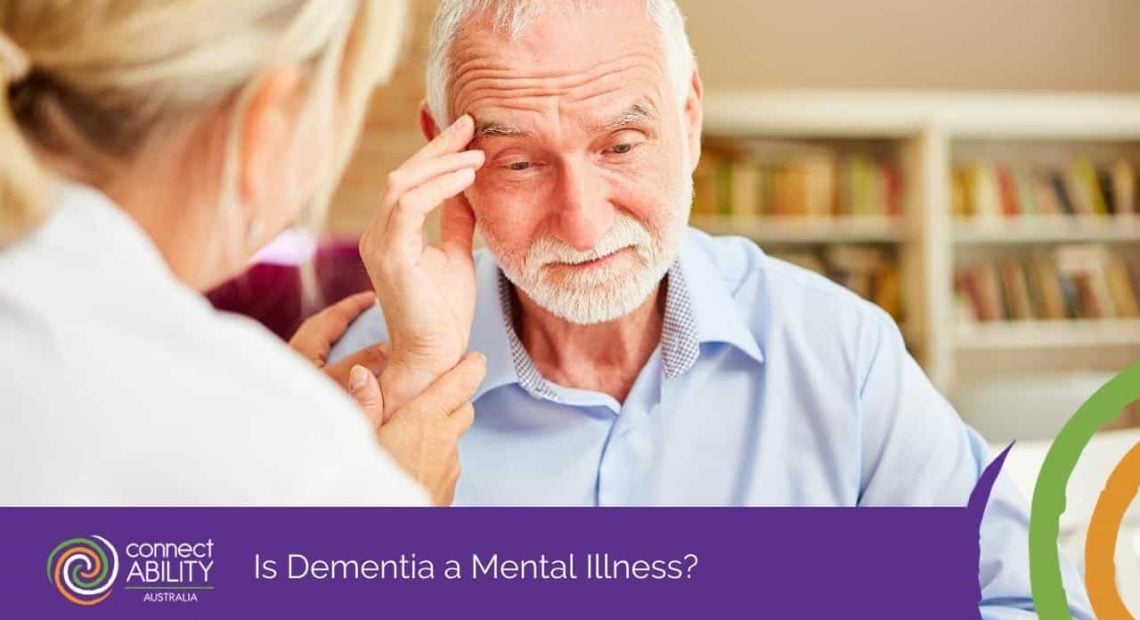 An overview of dementia and it’s signs and symptoms

Dementia is an umbrella term used to refer to a range of conditions that affect the brain, generally caused when the brain is damaged by a stroke or series of strokes, or by diseases, such as Alzheimer’s disease.

While dementia is not a natural part of growing older, it tends to occur most frequently in people over the age of 65. There are things you can do to reduce your risk of developing dementia, or to manage your symptoms, including maintaining heart health, keeping the mind active, and staying social.

Can dementia be cured or treated?

There is no cure for dementia, however there are a range of treatments available to help someone with dementia to live well and to think more clearly – including drug, non-drug, and alternative therapies.

There are pharmaceutical drug treatments available to a person with dementia, to help control the symptoms or even perhaps to stop or slow their progression. Most health professionals will recommend a non-drug approach be tried prior to prescribing medication.

Non-drug treatments for dementia include:

Is dementia a mental illness?

The unique social and physiological, psychological and medical effects of forced isolation during COVID-19 lockdowns have prompted several new studies, shining a spotlight on the mental health and wellbeing of our elderly.

The short answer here is, ‘no, dementia is not a mental illness’, however, the brain is a complex beast and dementia can look very similar to certain mental health conditions. The two often co-exist and this can sometimes make it difficult to distinguish between them.

Similarities between dementia and mental illness

Symptoms of dementia can mimic those of mental illness and vice versa – in fact, some psychiatric disorders are considered essential to defining, and helping to predict, the type of dementia a person is likely to develop.

A previous history of psychiatric disorders, especially schizophrenia and depression, and/or prolonged periods of irritability and apathy, have been shown to increase a person’s risk of developing dementia later in life. Inversely, older people with dementia often experience the functional and cognitive symptoms of their disease in tandem with psychiatric disturbances.
For example, people with Alzheimer’s disease typically experience delusions, hallucinations, anxiety, and agitation amid confusion, along with suffering dense impairments of orientation, memory, and knowledge; people with frontotemporal dementia may present with a deterioration of conduct and language

How to tell the difference between dementia and mental illness

It can be difficult to differentiate between dementia and mental health problems such as depression and schizophrenia. Some changes may be quite notable, while others may creep up so slowly that their onset may be missed. Some symptoms can be identical, including personality and behavioural changes such as:

The only way to get the correct diagnosis is to seek help – a medical professional, such as a neurologist or psychiatrist, will carefully review a person’s symptoms and take a thorough medical history

Physical and neurological tests will likely be performed, and other tests may be ordered to rule out other conditions with symptoms similar to dementia and Alzheimer’s disease, such as thyroid conditions, reactions to medications or drug interactions, vitamin deficiencies, and urinary tract or other infections.

A mental status evaluation will be performed, which includes detailed cognitive testing and a systemic examination of each psychiatric domain (such as mood, conduct, and thought processes). Brain imaging may also be used to identify other causes for the symptoms described, such as head trauma, a tumour, or stroke.

It has been observed that the incidence of psychiatric disorders in people with dementia is incredibly high, with people experiencing “one or more disturbances of mood, behaviour, perception and thought content”. Further, it has been suggested that psychiatric states are more common in residential care settings than they are in the community.

Even so, research has shown that most elderly community-dwelling individuals with dementia will develop psychiatric symptoms – such as depression, irritability, apathy, anxiety, and, frequently, combinations of these and other symptoms – within 5 years. This significantly increases the burden of care for the loved ones and carers of those people experiencing dementia complicated by psychiatric disturbances who are still living in the community.

If you are the older person’s main caregiver, and caring for them is becoming a strain, contact a support service such as ConnectAbility, based in Newcastle and the Central Coast, NSW, to assist you to access respite care, provide advice on finding or choosing a residential aged care facility and access in-home care and assistance.

You may also want to consider finding a support group (for both yourself and the depressed older person), as it can be helpful to connect with other people who are in similar situations and dealing with similar issues.

If you or your loved one is determined to retain their independence and remain in their chosen home for as long as possible, the government’s ‘ageing in place’ ideology means that there are plenty of in-home supports available to help make that a viable option.

Applications for assistance for dementia, Alzheimer’s disease or psychological disorders can be made under the NDIS and are assessed on a case-by-case basis. If the symptoms of dementia or mental illness are not severe enough to meet the NDIS criteria, access to government-funded aged care services may be applied for through My Aged Care.

Supports from ConnectAbility can include:

There are several in-home care packages and services available. Speak to a registered provider, such as ConnectAbility, for more information.

ConnectAbility Australia provides all the disability and aged care advice and support services you need, helping you to find and access appropriate in-home care services or Supported Independent Living services that are perfectly matched to your needs.

If you would like more information on how ConnectAbility can help an older person suffering from dementia or a psychiatric disorder to feel more supported, remain socially active, and live well, please call us on 02 4962 1000 (Newcastle) or 02 4349 3700 (Central Coast). Alternatively, you can email us at contact@connectabilityaus.org.au or complete our contact form to have a ConnectAbility representative contact you right back.